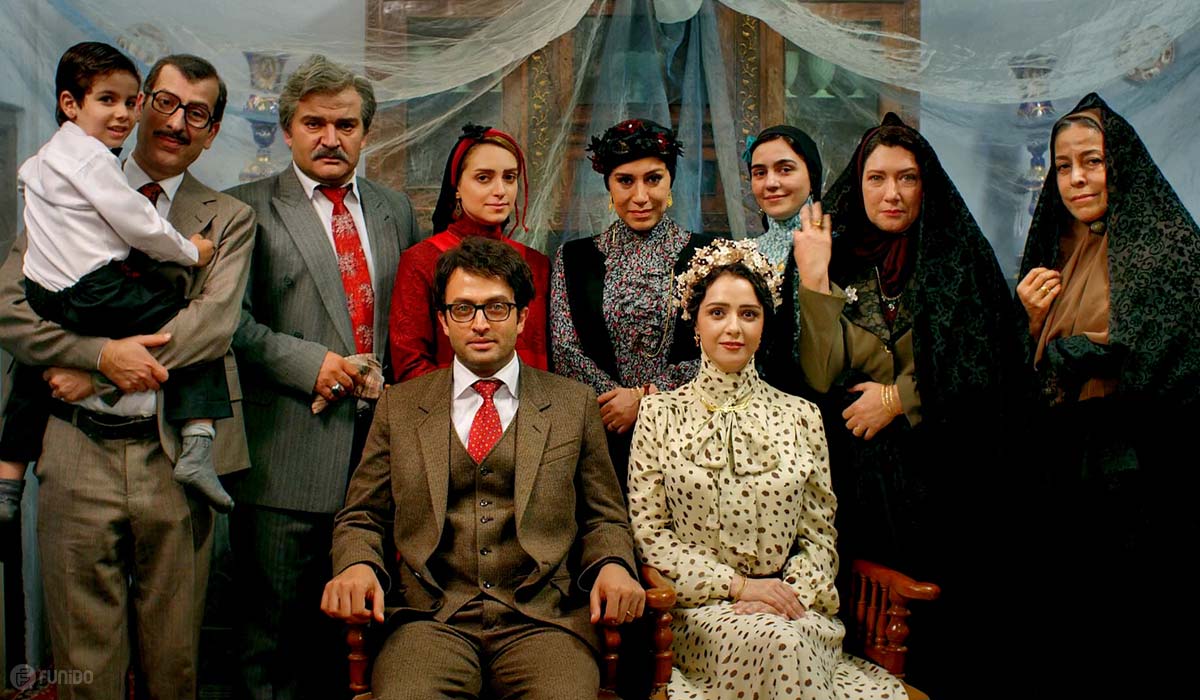 For 9 months, Shahrzad, a phenomenal TV show, has kept the Iranian on the edge of their seats all around the globe. The show is coming to its end after an amazing first season exclusive availability in the “Home Video Sector”. From its beginning to the end, the show has received more than enough criticism and (mostly) positive reviews. This only means one thing: it’s ready to be presented to the world.

What is the Home Video Sector? All multi-media content in Iran has to be approved by the Ministry of Culture and Guidance. Similar to NCC and MPAA in the US, Ministry of Culture and Guidance makes sure the content of all the media available to people stays clean and doesn’t convey ideas that can trigger harmful behavior. In order for the producers and writers to avoid strict and exacting guidelines, the Home Video Sector was introduced by the Ministry of Culture and Guidance. The Home Video Sector is a new way of making TV shows available to people within Iran. In this method, the show is produced and provided to people on DVDs or online. However, the show must never be broadcast or even advertised on TV or any public medium. Several other shows have used this method as a way of being brought to people, however the lack of support and the fact that they’re almost never advertised enough, kept all those franchises from receiving the attention they deserved. With all that said, “Shahrzad” still managed to surpass in the market in terms of viewing numbers and rankings among other shows broadcast on TV.

Availability: The show is distributed in the form of 60-minute episodes every Monday on DVDs in 480p SD quality, and online in full 1080p HD, at the price of 4000 Tomans (half the price of a cup of coffee in Iran).

Footsteps resonate on cobblestones, snooker clubs are open, women and men go partying together, cabarets are full, the alcohol flows, chapeaux are fashionable, the national theater is showing Othello and, in the small cinemas along Lalehzar – old Tehran’s Champs-Élysées, Casablanca is showing…

Shahrzad, an outstanding medical student, and her boyfriend Farhad, a literature student and an open-minded journalist, are living in 1950s in Tehran, the capital of Iran. They often date at the Cafe Naderi, a hub for savants. Their strong relationship is seriously jeopardized after Farhad, who is also a supporter of deposed Prime Minster Mossadegh, is jailed with allegation of murder. In the military court he is sentenced to death by firing scud, but at the last moment he is freed by the order of one of the coup’s influential figures (Named “Bozorg Agha”) who Farhad’s dad works for.

Before all this, Shahrzad, who’s also Bozorg Agha’s doctor, used to pay regular visits to his house to check up on him, so he knew about her relationship with Farhad. Although it’s never really mentioned, it’s clearly noticeably that Shahrzad’s looks resemble Bozorg Agha’s dead wife who he loved dearly and lost in a car accident along with his son. It turns out later that the accident was caused by one of Bozorg Agha’s rivals/enemies.

Freed from the jail and survived from his trial sentence, Farhad gets out alive not knowing what his dad has given up in exchange for his life: Farhad’s relationship with Shahrzad. The leaders of the coup taking control of economy, limit the freedom of speeches, and also ban Farhad’s paper. But the worst come is yet to come. One of the terms of Farhad’s freedom is that Shahrzad must never speak of why she broke up with Farhad. Bozorg Agha orders Shahrzad to marry his nephew, “Ghobaad”, who’s already married to Bozorg Agha’s infertile daughter, Shireen. Ghobad is portrayed as someone who generally disapproves of Bozorg Agha’s actions, but since he likes the luxurious life Bozorg Agha provides him, he never stands up to him. He doesn’t even love Shireen and is punished several times by Bozorg Agha for treating Shireen badly. Not to mention, Shireen is also a very sensitive and is gradually going out of her mind and turning into a maniac.

The night before Ghobad marries Shahrzad, Shahrzad and Farhad try to escape to a distant city (Shahrzad’s hometown, Shiraz) and plan to stay there for the time being. However, one of Bozorg Agha’s proxies overhears Shahrzad’s phone call, finds out about the plan and informs him. As a result, Bozorg Agha sends his guys to bring Shahrzad home. They also beat Farhad to death afterward for what he did. To show his disapproval of the decisions made for him, Ghobad shows up to the marriage ceremony drunk. After seeing Shahrzad there, however, he’s surprised and kind of taken aback. Over the following few days, Shahrzad spends days and nights depressed by the situation she’s in. But being rational, she finally decides to cope with the situation. She later realizes how sweet Ghobad is and realizes how Ghobad has failed to show his good nature in the face of Bozorg Agha’s aggressive and feelingless lifestyle. Over the course of the show, Ghobad gradually falls deeply in love with Shahrzad. And Shahrzad also reciprocated his feelings by being caring to him.

Months later, Shahrzad and Ghobad reach an agreement on the fact that Ghobad must finally stand up to Bozorg Agha and divorce Shireen. Shireen also doesn’t want to stay married to Ghobad nows that Ghobad spends most of his time with Shahrzad (against Bozorg Agha’s will). When he indirectly pops the idea, Bozorg Agha reassures him that his daughter, Shireen should be Ghobad’s main focus and that Shahrzad is only there to birth a boy so that Bozorg Agha has a descendent. In the mean while, Shireen is showing signs of becoming a maniac and tries to suicide twice. She also kills one of the servants while sleep walking. Seeing the situation to his daughter’s disadvantage, Bozorg Agha orders Ghobad to divorce Shahrzad a few months after she gives birth to a boy. Ghobad later reassures tells Shahrzad about the situation and reassures that after the divorce, he’ll get back together with her once he gets the hang of the situation and Bozorg Agha. Bozorg Agha then carries out the forceful divorce very quickly and keeps the child. Feeling devastated, Ghobad feels like he can’t do anything to stand up to Bozorg Agha but comes to meet Shahrzad at her house a few times later because he was still in love with her.

Many say Bozorgh Agha’s character resembles Don Corleone in God Father, simply because his wishes should always be granted and no one can say anything against his will. He’s also portrayed as a grey character. Someone who’s not good and not bad either. Although he’s against complete freedom, he’s also against the malicious acts of the king of the country. His Mafia business is done with the aim of correcting the mistakes in the city in which he lives. During the course of Shahrzad and Ghobad’s marriage, 4 main authorities in the city who see their lives jeopardized by Bozorg Agha, set out to kill him. However he’s saved with the help of Farhad and Ghobad.

Anyways, the night after the divorce, “Jamshid”, Shahrzad’s father who’s still a close friend of Farhad’s father (they both work for Bozorg Agha), meets up with Farhad’s father, “Hashem”, and tells him how he can’t stand seeing his daughter in sorrow. Jamshid has a heart attack and dies crying. Minutes before dying, Jamshid tells Hashem how he’d triggered the marriage of Ghobad and Shahrzad by talking to Bozorg Agha about how Farhad was delaying his marriage with Shahrzad. Trying to be a good friend, Hashem never speaks of this to Farhad ever after Jamshid dies. The incident along with the previous events make the situation even more severe for Shahrzad.

So what has Farhad been up to all this time? Well, after a couple of months depressed, he continues his subtle, and yet influential, activities in the field of media against the regime. While at it, he meets another courageous activist writer, “Azar”, who falls in love with Farhad after a few dates and through the poetry he does for her. It later turns out that Azar is the ex-wife of the man Farhad accidentally killed in the coup. In the story, she gets shoot once and manages to stay alive with the help of Shahrzad. This was basically the only time Shahrzad reunites with Farhad after marrying Ghobad. After being turned down by Farhad at last, Azar is killed in the border of the country while trying to escape the country with her son. Farhad turning Azar down, was basically reminded Farhad more of Shahrzad and made him realize that he’s still not over her love for her.

Back to Shahrzad’s disastrous situation: Divorced and with her father recently dead, she feels like she has nothing to lose now. After Farhad finds out about the divorce he meets up with Shahrzad a few times secretly at Cafe Naderi, their old hang out. Although the’ve both changed even in manners and speech, they’re both reminded of their affections over the course of their reunion after the divorce. However, Shahrzad still doesn’t let her guard down. Overtime, Farhad realizes that there must be a reason why Shahrzad, while now divorced, is treating Farhad differently. He later asks his father to tell him the truth about why this whole thing happened and why Shahrzad even agreed to marry Ghobad so quickly. His father tells him how Shahrzad had done it so that Bozorg Agha wouldn’t let Farhad be killed after his manslaughter.  Understanding the sacrifice, Farhad drives up to Shahrzad’s house to discuss the matter, but meets Ghobad there who’s come to bring the child so that Shahrzad could have her once-a-week meeting with her son. After getting into a heated argument and physical fight, Shahrzad brings them both into her house and tells Ghobad how she’s decided to marry Farhad, who she’s loved all this time. After Ghobad leaves with the child, Farhad reckons that Shahrzad did this so Ghobad would leave her alone. But Shahrzad reassures him that she still has feelings for him.

A separate love story is carried on alongside Shahrzad and Farhad’s. It’s the story of two of their friends who are also serious in their relationship. However their story is different. “Maryam” and “Babak” although in the same emotional state as Shahrzad and Farhad, both work in the theater. A governor tries to seduce Maryam by introducing her to a well known director who’s casting for one of his movies. In order to avoid a problem like Farhad’s, Babak quickly asks Maryam to marry him so that the governor would stay back. But Maryam rejects his proposal and says her feelings have changed and that she’s starting to see everything differently. Their story is portrayed in a way that conveys the fact that love is not always perfect. Love is sometimes unrequited and not all two lovers manage to keep their love alive. Coincidentally, one night when Bozorg Agha has decided to kill all the authorities who’d previously tried to kill him, Babak brings a gun to kill the governor. The governor and Babak shoot simultaneously, and although the governor’s hit, governor’s bullet hits Maryam who tries to cover Babak. After seeing Maryam die on his hands, Babak kills himself.